The second weekend in September, my husband – Jeff and I went away for a long weekend to Boston. I love Boston! We first took a trip there when we were dating and we both fell in love with the city, everything from their accents to, the great shops, to the European feel you experience while walking the streets. We swore that we would get back. This year we decided to make it our anniversary trip – we celebrated 2 blissfully happy years on August 27th, and we decided that we had to watch the Toronto Blue Jays play the Boston Red Fox at Fenway (this was something we were not able to do the first time we went, since the Red Sox were out of town).  So we packed our bags, sent the little man off to Grandma and Grandpa, and headed to Boston.

Everything was going great until Thursday night – did I mention that we landed Thursday morning? We went out for a steak dinner at Grill 23 and it was delicious. We had wine and Crème Brule, it was amazing! But, then I was up the whole night being sick. Just awesome! I was not going to spend our time in one of my favourite cities stuck in the hotel room though. I powered through on Friday, enjoying the sights and walking hand in hand with Jeff, the whole time wanting to just curl up and sleep for days. But it’s amazing what going to bed early will do for you. By Saturday I was rearing to go and I was so excited to get to the game! We went on a batting practice tour, which basically means we got to walk on the field for 3 minutes and then sat above the Green Monster for Red Sox batting practice and I ducked while he tried to catch the balls that they were smashing our way (I’m convinced it was because of our Blue Jays gear ;).) We then went down near the dugout to watch our home team take batting practice. I totally made eye contact with Henderson Alvarez and JP Arencibia! After being drenched in an insane downpour – something we Torontonians don’t have to worry about with a stadium that has a retractable roof, we decided that with an early morning flight, the smart thing would be to head over to a bar and have some beer where we could at least stay dry and warm to wait out the rain and then watch the game on TV. We felt pretty safe walking around in our Jays shirts and hats since they were beating them to a pulp!

I love going out for brunch, here in Toronto, on vacation….it doesn’t matter where I am, I LOVE brunch. So on this trip we took some advice and went to The Beehive, located in The South End of Boston it is a very up and coming neighbourhood. This place has a real eclectic, funky, yet elegant feel to it. See the photos below to see what we ate. I will let you decide who ate what! 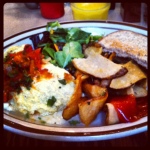 For those that don’t know, I really like baseball and going to baseball games. Together Jeff and I have been to many games, 2 of which we went to on our honeymoon, if you can believe it. We have visited a handful of different stadiums in the U.S, but I have to say that Fenway is by far my favourite. I don’t know if it’s because it is celebrating 100 years, or because of how much Boston loves their baseball and their team (despite their shockingly terrible season), but being there was a TON of fun. 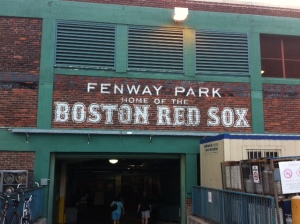 For anyone wanting to visit Boston here are my top 6 picks of things to do/see:

Fenway Park: As already mentioned, I loved Fenway. Though generations have come and gone, Fenway Park remains, much like it did the day it opened on April 20, 1912. It is the oldest baseball stadium in the U.S; many improvements have been made to keep it shining new. Definitely a must see, even if you’re not a baseball fan.

Faneuil Hall Market Place: In the heart of Boston, Faneuil Hall Marketplace is adjacent to historic Faneuil Hall and is bordered by the financial district, the waterfront, the North End, Government Center, and Haymarket. You can buy great things to eat, just ask Jeff about the chocolate cannoli he said he didn’t like, yet devoured in record time.

Boston Common: The starting point of the Freedom Trail, Boston Common is the oldest park in the country and ideal for Boston sightseeing. The park is almost 50 acres in size. On both trips Jeff and I really enjoyed finding a patch of grass to take a break, lie down and maybe take a nap!

Harvard University: Harvard University, which celebrated its 350th anniversary in 1986, is the oldest institution of higher learning in the United States. We took a tour of the campus on our first visit and then enjoyed strolling through on our second. Being there makes you want to learn! What an impressive place. No pressure to our little man Brady, but maybe one day we will be visiting him at school there!

Duck Tour: The fun begins as soon as you board your “DUCK,” an authentic World War II amphibious landing vehicle, renovated for sightseeing. First, you’ll be greeted by one of the legendary tour ConDUCKtors, who’ll be narrating the tour. As the best of Boston unfolds before your eyes, your ConDUCKtor will be giving lots of little known facts and interesting insights about the unique and wonderful city of Boston.

Pub Crawls: Whenever we go on an adult only vacation, hubby and I like to pretend that we are 21 again and go on pub crawls. Let me tell you, Boston is such a great city to do this in! There are so many great pubs to visit, where we can dance and pretend we are students!   You can even find an actual Boston pub crawl map!

Have you been to Boston? What was your favourite part?

For those of you that don’t know, I am very fortunate to be apart of a very exciting new project with Eva Redpath. Her new online show “Get Fit in the City”   with Coral TV has just released its second episode. In the episode, Eva (and I) took a Pilates/Yoga Fusion class with Amber at Misfit Studio.

From the moment we walked up to the studio we knew that we were in for a treat. Misfit Studio is a little studio located in the Queen West area, Queen and Euclid to be exact. It is earthy and warm and bright and is a perfect reflection of its owner, Amber. Even her bathrooms rock! You will find awesome vintage decoration throughout – the walls, seating, and storage and even on the walls of the bathroom. It is super creative, and super edgy and super awesome!

From the time class started, Amber’s style put me at ease and I immediately trusted her and wanted to push through the insane AB workout, even though I felt like my stomach was ripping apart. Her class is Pilates/Yoga fusion, and it is exactly as it sounds.  It is an hour of mat based work where you will stretch, strengthen, sweat and get your heart rate up through Amber’s sun salutations, warriors and lunges. In addition to being a fabulously choreographed class, in the background she plays tunes that you wouldn’t expect to hear in a yoga class and have you wondering why the heck not?!

There were many times throughout the class where I found myself mesmerized by the way Amber moves.  She literally oozes as she moves, it’s gooey and smooth and effortless. All of this matched with her impeccable explanations and cues make this class and this studio a definite must!!

What I love about Misfit Studio (In addition to what I already talked about), is that it’s not your typical studio. I love that! In a city where there are literally thousands of us yoga instructors all teaching you how to downward dog, warrior, stand on your head, etc., you need to find your own niche & a way to set your self apart. Amber has done just that with Misfit Studio.

If you are looking for a studio where you can stray off the usual & predictable yoga trail, then get your butt to Queen and Euclid!